Finally WE got to do something!!

And we got it done in a DAY!

Hubby had to lean on the foundation guy to get him to come back on Saturday and finish up the foam and rebar he had to do so that we could run the tubing for the in-floor heat, or he would have put us off another week. And it did take some leaning and some guilting, because I happen to have overheard foundation guy arguing with someone else on the phone, who also sounded pretty upset, and who he had promised he'd be out first thing in the morning....I wonder what he told that guy.

Fortunately, he did come back and finished up enough framework for us to do what we needed to.

One of the things we've done to keep costs down is to find contractors who were open to the idea of us doing some or most of the labor and bringing them in for the parts that really require their expertise. Our HVAC guy was completely behind this idea, because that meant we would run the tubing - and he didn't have to. He was thrilled about that, and even drew up a plan for us and gave us all kinds of advice and information.

So, bright and early Sunday morning, Hubby and I got up there and got to work. 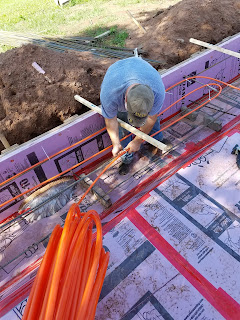 1) With the deep well footings we have, and the need to extend the tubing out over them on all sides, this was NOT a two person job.  One of us had to be jumping in and out of the trench constantly as we ran the tubing back and forth. (The photo above shows the tubing running along the rebar, but what you see there is about the only place we did it like that - the rest of the way around, we did it so the loops were sticking out over and could be zip-tied to the rebar much easier, and provide much more stability.

2) If we had it to do again, we would have special ordered 300 ft rolls if we'd had to.  When we went to buy the stuff, they didn't have any - they only had 1200 ft rolls, and we thought, "no big deal, we'll just cut it into 300 ft sections, same thing right?  NO. As it turns out, having unwound it all - and then coiled it up again - had created big orange monsters that were not easily controlled. Hence - another reason this wasn't a two person job.  We need one in the trench, one to staple the tubing...and one just to wrangle the damn coil.

Here's the first coil's worth: 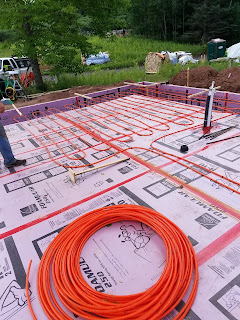 See that silver truck up in the left corner there?  That's the cavalry coming in to save the day! Just as we were finishing up coil 1 of 8 and wondering how in the hell we were going to get all that done ourselves, our very good (and very loved and very appreciated) friend, Rusty, showed up to help.

As a THREE person job, it was MUCH smoother, MUCH easier and MUCH MUCH faster. Also, quite a lot of fun. 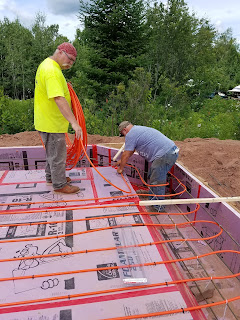 We got all the rest of it done by late afternoon and still had time for beer and cheese curds at the bar! (Welcome to Wisconsin, y'all)

We did NOT end up following the HVAC guy's plan, and I was a little worried about that, but when he went out to inspect it a couple days later, he said we did a better job than most plumbers he knows, and left us a hat! 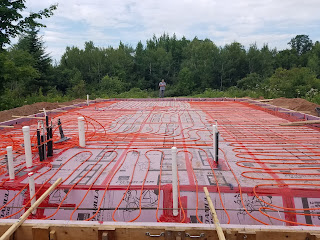 We did take the HVAC guy's advice and did NOT try to do the manifold set up at the end of the day. He strongly recommended coming back to do that the next day when we were rested up and had clear heads.  It was good advice - it takes a certain amount of puzzle solving and a LOT of patience to get all those tube ends to line up neatly in a tiny little space and say put. 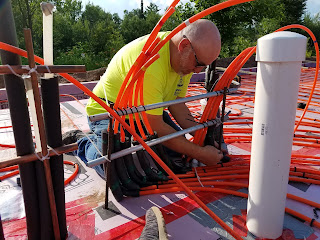 In the end, we triumphed over tubing and bent them all to our will. (Literally.) 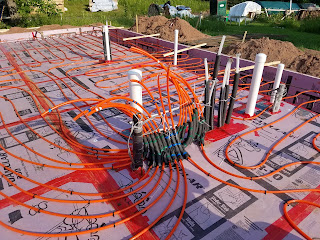 The only thing we did wrong was not taping off the ends of the tubes to keep anything out of there. Fortunately, the HVAC guy did that for us while he was inspecting. And STILL thinks we did better than most plumbers!  HA!

So, all that's left now is for the foundation guy to come back and lay his rebar over the top of the tubing and then POUR THE CEMENT.

After that, he is out of our hair, and the flow of work rests pretty squarely on us, with a little input from the weather.

I'm so excited to finally get MOVING on this!!

Posted by Sassy at 8:46 PM No comments: Links to this post

July has not been an eventful month

July has NOT been nearly as eventful as we'd hoped.....

Our foundation guy has been taking FOREVER and is about on our last nerve.  We are SO FAR behind, and it's primarily because of him and all the days he's NOT there working, or only works part of the day...or so many reasons that he has.

He finally got his dirt work done and got started on the foam in early July. 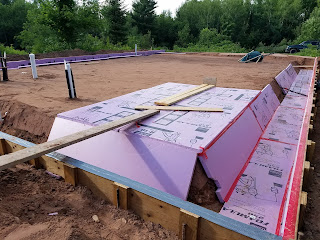 In the meantime, Mom helped us with spraying all the logs with Bora-Care.  We opted to go with that instead of making our own Borax solution for a couple of reasons.  Without any water on the property, making the solution and keeping it hot was going to be a problem, and we were just really concerned about the quality of the solution we'd be able to produce. The Bora-Care is much more stable, and was recommended to us by the guy who sold us our timbers and corner posts.  Plus, you can get it with a Mold Killer additive, and we thought that would be a good idea given some of the issues we had in the fall. 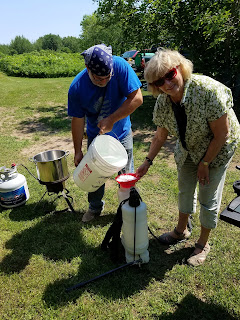 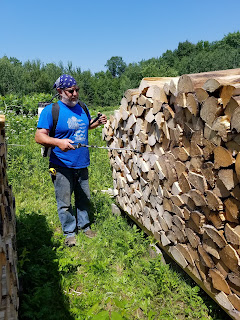 We got a little over half of what we'd cleaned sprayed (eight full ranks), before we ran out of solution, so we'll need to get more and do the rest. We're also considering some kind of additional Borax dip or something as we do the final log prep before each session of cordwooding, since this got the ends mostly and not so much of the middle. But we're less worried about that since we're using spray foam insulation rather than sawdust.

At the end of the day, the three of us sat down to have a drink and cool off, and I was surprised to see the rest of my family arriving to throw a birthday party for me.  :)  My mom gets Poker Face of the Year....they were out on the road honking their horns as they pulled into the driveway (four cars worth), and she's sitting there sipping her wine and says absently, "Hmmm...someone must have gotten married..." 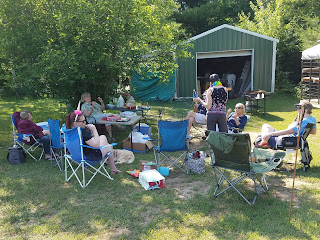 It was a wonderful time, and a very very welcome surprise.  It's nice to have some time like that when everything else is not going exactly to plan.

They asked Mom to spike the cake..... 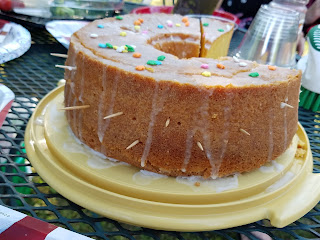 I THINK UR DOIN IT WRONG.

My hubby got me a Dewalt chainsaw for my birthday, and my own present to myself was a little bistro set for sitting in the orchard on a nice day and admiring the beautiful property. 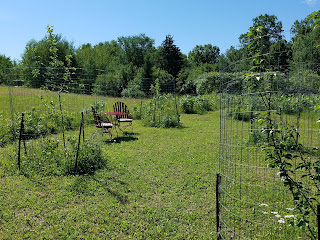 I have since added an umbrella for a little shade and it's just a wonderful place to sit and enjoy the peace and quiet.

Here's another one for the positive column - they came to dig the well in early July!! 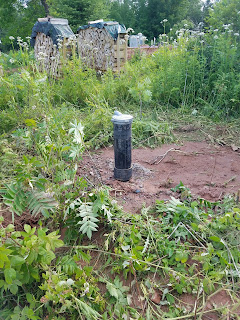 No running water yet, just the well, but that's HUGE, and they didn't have to go extremely deep, so they kept within their original quote.  We were a little worried about that - and about the quality of the water, but it seems to be nice and clear, and tastes pretty good.  When we lived out in the country before, our water was orange and smelled and tasted like rotten eggs.

Two weeks later...and they were finally getting the foundation prep to the point where we could come in and lay the tubing for the in-floor heat.  Our narfed off corners stumped them a little bit, and Scott had to help with the construction of the form for those. 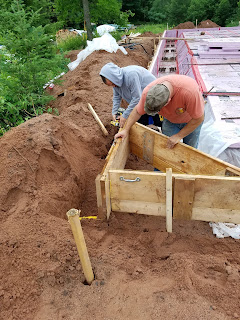 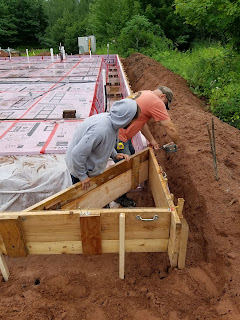 I will leave you now with a long view of the house and the property, and remember that things ARE moving along. 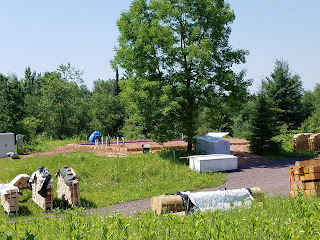 Posted by Sassy at 8:12 PM No comments: Links to this post 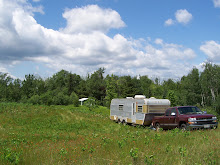